At Hope Lutheran School, we value a Christ centered education by which students are challenged spiritually as well as academically.  We offer all the core subject areas such as Language Arts, Math, Science, and Social Studies, but we also offer many other classes such as Religion, Music Instruction, Computers, Spanish, and Art.  While we offer these classes to better equip our students with a well rounded education, the focus of our school is building our students’ faith in their Savior, Jesus Christ.

When reviewing how Hope Lutheran School performs academically, it is important to note that we have this emphasis which public schools are unable to carry out.  We take time out of our schedules to explicitly and implicitly teach valuable lessons in the Christian faith. We live our mission statement of “BUILDING lives of EXCELLENCE upon the foundation of CHRIST” through our school day in which we focus on the whole child academically and spiritually.

Our test scores then are not only compared to those of the rest of the state of Kansas, but also to the thirteen other Lutheran schools in the state who also strive for this level of excellence in religious education. These fourteen Lutheran schools make up a district within the education system in Kansas, and all of the Lutheran schools, except for one, take the Kansas State Assessments which measure college and career readiness for grades three through eight.  The Kansas State Assessments are broken down into two tests: mathematics, language arts, and science.

Below are side by side comparisons of our performance on each Kansas State Assessments taken in the Spring of 2017. 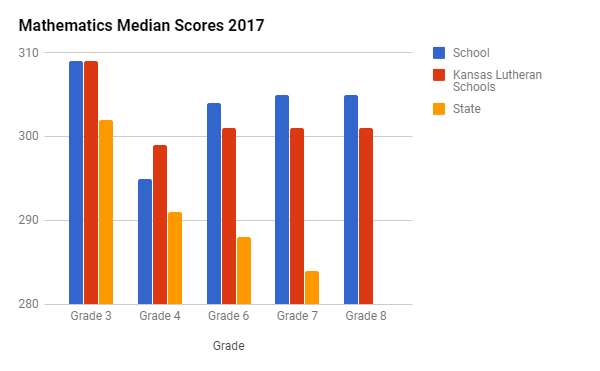 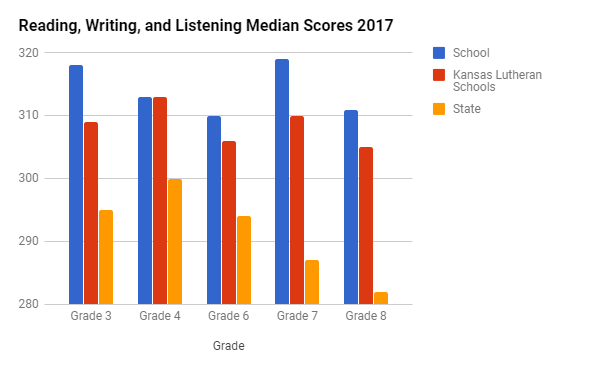